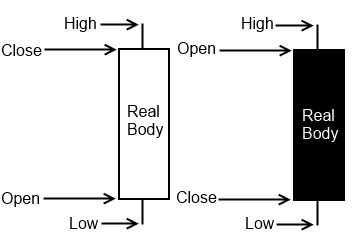 Candlestick charts are best explained with the aid of several diagrams. Candlesticks can be used in conjunction with any time frame, with the Candlestick providing the trader with a visual description of price action during the specified time frame.

If you open up a candlestick chart you will notice that the size of the real body will often vary significantly. Longer bodies suggest either strong buying or selling action, while shorter bodies suggest little selling or buying action, with the currency pairing trading in a narrow range. 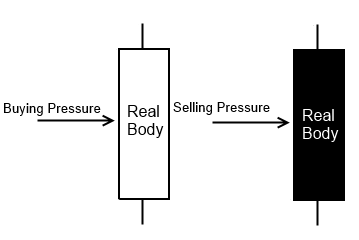 You should have now worked out that a long white candle suggests that there is strong buying pressure.  The longer the candlestick the further the close is above the open pricing. Typically long white (unfilled) candlesticks suggest that lots of buyers were entering into the market forcing prices up.

The upper and lower shadows also impart important information about price action. The upper shadow signifies the high of the time period, while the low shadow signifies the low of the time period. Candlesticks with long shadows show that trading occurred well below and above the close and open, this pattern suggests that there was significant amount of volatility during the selected time period. Candlesticks with short shadows show that the trading was confined to a relatively restricted price range with the market displaying little volatility. 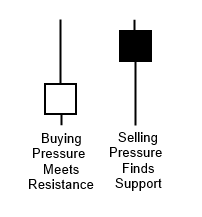 If a candlestick has a long upper shadow but little or no lower shadow, this shows that there was a lot of upward buying pressure. But for some reason or other a number of sellers came in to force prices back down.

Candlesticks with a long lower shadow and no or little upper shadow show that there was significant selling pressure, but for some reason a number of buyers came in provided support to ensure that the close remained close to the open.