Those who are new to trading may not be familiar with certain terminology. Drawdown is most commonly used to refer to the high-to-low decline experienced by a trader or fund over a specified time period. 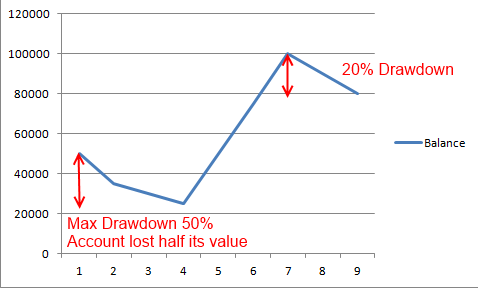 In general drawdown is quoted as a percentage, for example if $100,000 was a funds high point but after a series of bad trades this dropped to $80,000 this would constitute a drawdown of 20%. Drawdown is measured from the time a retrenchment begins until a new high is reached, which is why you will often hear people referring to the max historic drawdown. Maximum drawdown is the amount of equity lost by a trader or fund during its entire history. For instance a trader may have recently experienced a 20% drawdown, but in the past he could have experienced much more significant drawdown. The biggest historic drawdown is referred to as the maximum drawdown.

Why is drawdown important?

Many people use historic drawdown to help determine an investments risk. Funds or traders which have gone through periods of significant drawdown are seen to be significantly more risky. It is very likely that funds or traders will go through periods of poor performance, even a system is which is profitable 80% of the time could feasibly experience an extended losing streak. Limited historic drawdown suggests that a trader has been effectively managing risk, risking only a limited amount of their total equity each time they open a position. When it comes to Forex, all social trading networks will quote a signal traders historic drawdown to help users determine the riskiness of a signal provider or trader.

The Limitations of drawdown when assessing risk

While drawdown can be useful in determining risk, it has some limitations. First off historic drawdown provides no indication of future risk and is simply a measure of past performance. While a trader may have a very low historic drawdown, there is no guarantee that they won’t blow their entire account the next day. Drawdown has a limited use when trying to evaluate the risk of a new fund or trader, as there may not be enough data to give an adequate picture of the riskiness of an investment proposition.

Drawdown is useful in helping an individual determine the risk involved with a particular investment proposition or as a performance indicator. Though individuals must realise that as a historic measure, there is no guarantee that past performance will continue into the future. Even so paying attention to drawdown can help you get a handle on the kind of risks a trader or fund has taken in the past.