Both eToro and ZuluTrade allow users to sign up for free demo accounts before users are required to part with any real money. This allows users to try out the platform for free and it is recommended that you give a demo account a try before jumping in for real. 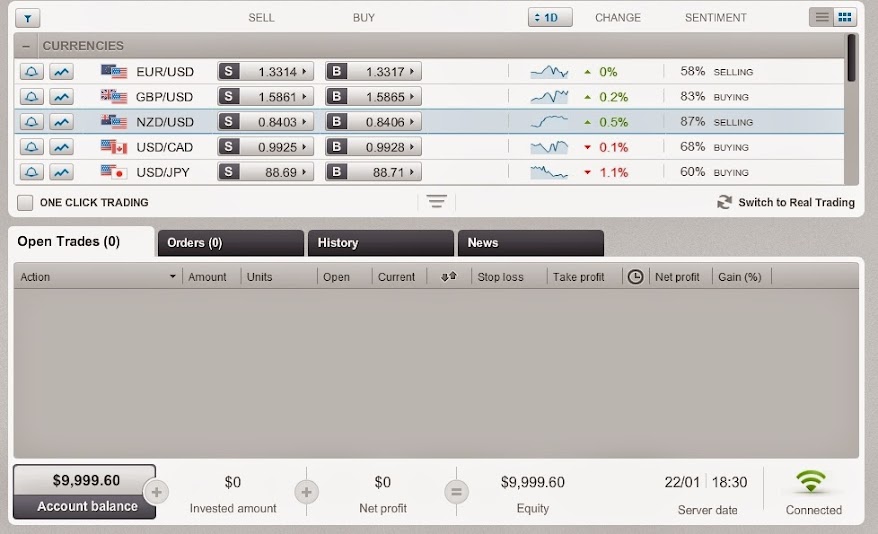 With eToro all costs associated with trading are calculated into the Bid-Ask spread quoted by eToro who acts as a broker themselves. This means traders typically face a 2.5-3 pip spread on the major currency pairings. While the spreads on offer at eToro aren’t the tightest around, users do not have to pay eToro commission for use of the service.

In general the costs involved using both networks are pretty similar provided you opt for a ZuluTrade brokerage which is competitive in both terms of spreads and commission.

Social trading success is largely down to picking the right traders to copy and both platforms have a number of tools which allow traders to look into the past performance of the traders on the platform. While past performance is no guarantee of future success, such data can be useful in weeding out traders who are using high risk trading strategies and may help when deciding which signal providers and social trading gurus to follow. 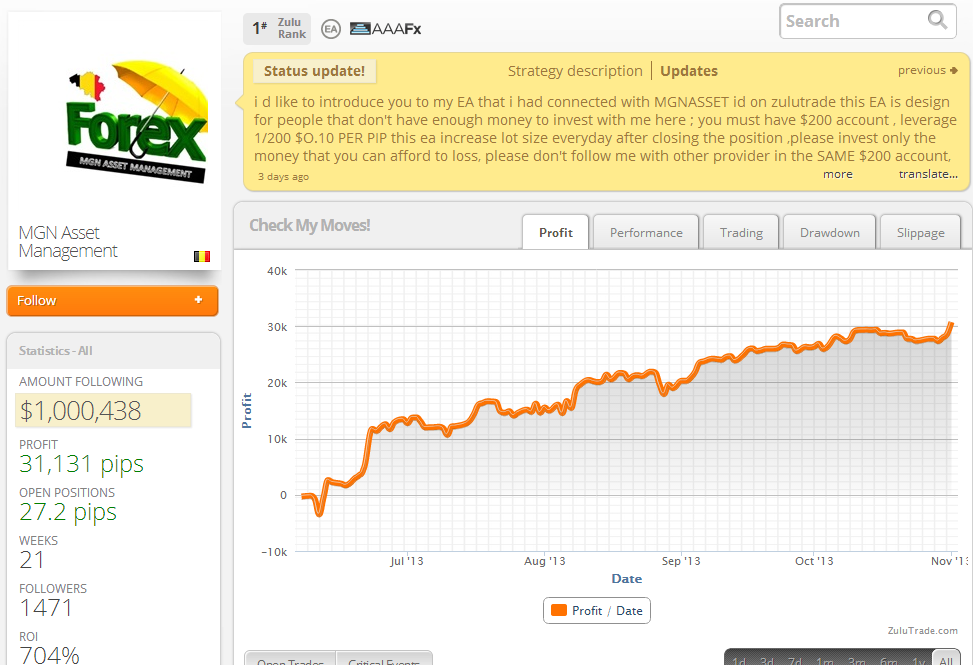 Risk management features are important as they allow you to control how much of your capital is risked per trade(r). Engaging in proper risk management is important and is something which shouldn’t be overlooked with both ZuluTrade and eToro differ significantly when it comes to their approach to risk management.

eToro takes what is often considered the more simple approach towards risk management. If you find a trader you want to copy you assign a certain monetary amount of money to copy the trades of that particular trader. You are not able to assign more than 20% of your capital to one trader to prevent you from placing all your eggs in one basket. The size of your trades is kept proportional to the size of the trades placed by the signal provider. So if for instance the individual you are copying decided to risk 5% of his capital on one trade, you will also risk 5% of your assigned capital.

ZuluTrade allows users to manage risk in a different way, with traders being able to determine trade size and place pre-determined stop losses which override the provider’s signals. Additionally traders can limit the number of trades that a signal provider is able to open at one time, which prevents signal providers wiping your account out by opening a huge number of positions at one time. This method requires that traders have an understanding of lot size and what constitutes a proper stop loss, but does allow for trades to take a more nuanced approach to risk management.

Those who are newer to trading in general will probably be more comfortable with eToro’s simple  approach to risk management, but ZuluTrade will probably appeal to those who have a little more experience with trading already.

How do the two networks differ in terms of performance? There are those who have had considerable success with both networks but neither service is without risk.

The quality of traders on each network varies and there have been a number of traders who have gained large followings only to then blow up their own accounts. Both networks have their star traders and those who should be avoided making it hard to say whether one network is truly better than the other.

eToro tends to attract longer term traders and stats released by the company suggest that the average trader keeps a position open for around a week. Traders have to also begin trading with their own money which leads them to be more risk adverse. Due to the fact that users may only assign 20% of their capital to following one signal provider gains and losses on the eToro platform tend to be smaller than with ZuluTrade.

ZuluTrade allows people using demo accounts to begin providing signals to users on the platform, this means that traders can earn commission without risking any real money themselves. This has attracted some inexperienced and high risk providers to the service which is something people should be aware of. Additionally ZuluTrade allows users to provide signals using EA’s which means some of the signals on the platform aren’t manually generated but are rather the product of trading robot, signal providers who use Expert Advisors are clearly labelled.

As you would expect success with social trading comes down to picking the right signal providers to follow, with each platform having a good number of solid traders to follow and copy. Many feel that ZuluTrade has attracted an increased number of high risk traders by allowing people to provide signals using EA’s and demo accounts. Both networks only pay signal providers commission if traders perform well and conform to certain performance criteria, which means only those who take a sensible approach to trading should be ultimately rewarded. We have covered the ZuluTrade Trader program and eToro’s Social Guru Program before.

ZuluTrade and eToro are two of the most popular social trading networks for good reasons and both social trading platforms have their own unique selling points. In my personal experience those who have more prior knowledge of trading tend to prefer ZuluTrade while those who are newer to trading tend to leans towards eToro. Those interested in trying out eToro and ZuluTrade should look into opening a demo account to give the two social trading networks a proper going over. It is important to remember that while some have significant success with social trading, as with all other forms of trading a significant amount of risk is involved.