Social and Copy trading has been a huge growth area in recent years, with a number of different services and brokerages allowing traders to automatically copy the trades of successful traders. ZipSignals has been around since 2008, making it one of the first copy trading services to be launched with rivals eToro and ZuluTrade also being launched back in 2008.

ZuluTrade: Also launched back in 2008, ZuluTrade is one of the best known copy trading networks and boasts a total of 30,000 signal providers. ZuluTrade is also brokerage independent meaning that traders can choose between one of 40 firms to use the ZuluTrade service with

eToro: The social trading niche leader. More than 200,000 traders and the largest selection of instruments, backed by the world renowned OpenBook social platform, and the Webtrader trading platform. Both a broker and a social network.

MyDigiTrade: A newer and less well known copy trading network, MyDigiTrade allows users to copy a range of different signal providers and have these trades automatically copied into their real trading account. The MyDigiTrade service is totally free and traders can choose between one of 15 supported brokerages.

How Does It Work?

ZipSignals is not a Forex brokerage itself so users have two options if they want to automatically copy the signals produced by the copying trading networks signal providers. Firstly, customers can sign up for a trading account with one of the firms supported brokerages. When a traders chooses this option the ZipSignals service is completely free, as ZipSignals receives rebates from these brokerages which cover the costs of running their platform and paying signal providers. Currently, there are only six supported brokerages to choose between (FXCM, Gallant Capital Markets, Liquid Markets, Forex FS, FinFx and Ava Trade). This means that traders have a rather limited choice when it comes to using a brokerage with the service, with copy trading networks such as MyDigiTrade & ZuluTrade offering a much wider choice of brokerages.

Those who do not want to use one of the supported brokerage can connect their MetaTrader 4 terminal to the service. This is done by running the ZipSignals Expert Advisor on the MetaTrader 4 platform allowing signals produced by their selected signal providers to be reproduced in their trading account. In order to receive signals 24 hours a day, customers are required to run MT4, non-stop either on their own computer. Customers also have to pay a fee to ZipSignals for each signal provider they want to copy, the fee ranges from $100 to $500 a month for each signal provider a trader wishes to copy. This makes using the ZipSignals pretty complicated and pricey, which means this is only a viable option for serious traders with a significant amount of capital at their disposal.

Setting up an account with one of the six supported brokerages and connecting to the ZipSignals takes around a week, which isn’t particularly bad. The minimum deposit required to use the ZipSignals service varies depending on the brokerage a trader opts for, but ZipSignals recommends that traders have at least $500 of capital at their disposal. 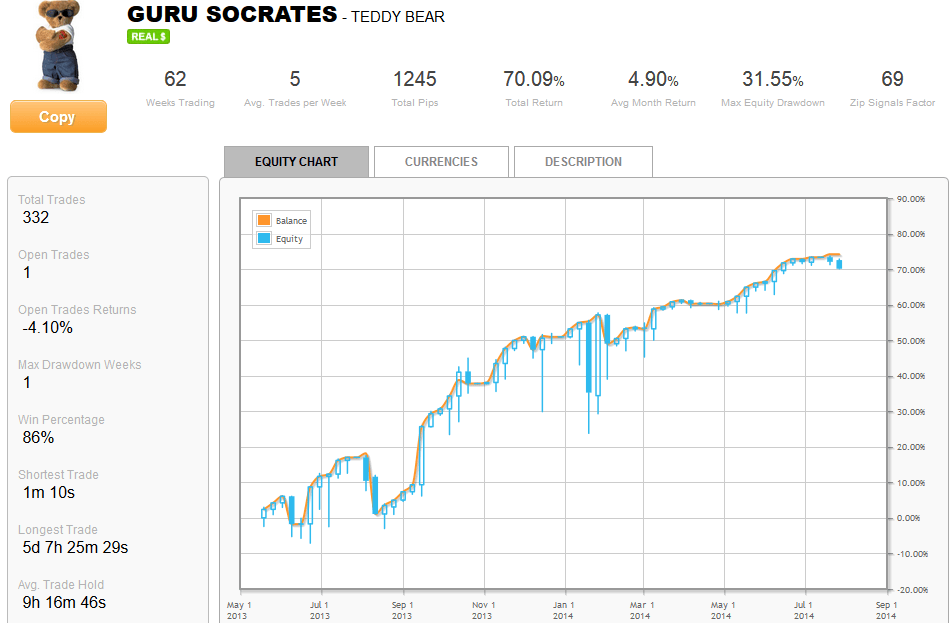 The success of any copy trading activity depends on the quality of the signal providers that a trader opts to follow. ZipSignals implement a number of measures aimed at preventing high risk/poor quality signal providers from being able to share their trading systems with the users of ZipSignals service. Traders are screened for a six week period, where ZipSignals monitors their trading activity to ensure that only traders with an exceptional trading strategy and proper risk management are allowed to go live on the ZipSignals platform.

Signal providers are receive 0.5 pips per trade placed by their copiers or 70% of the monthly fee they chose to set. It should be noted that these rewards are not based on performance meaning that traders are paid for their signals regardless of whether they are profitable or not. Meaning that traders can still make money during a losing streak provided that their copiers remain loyal to their trading strategy.

Despite this their seems to a be a number of quality signal providers sharing their trading systems on the platform. However, searching through signal providers and finding those which are worth following is no easy task with the ZipSignals online platform not being the easiest to navigate.

While ZipSignals was one of the pioneers copy trading having be running since 2008, the network is not as well known as some of its rivals. The ZipSignals service supports a relatively limited number of FX brokerages compared to its rivals and traders wishing to use a non-supported brokerage will face significant costs. Despite this ZipSignals boasts a number of impressive signal providers and may be worth considering for those wishing to use one of the supported brokerages.