Calculating the Commodity Channel Index is rather complicated, however the vast majority of trading and charting programs will work out the CCI for you. Below I’m going to outline how to calculate a standard 20-day CCI Indicator:

As calculating the mean deviation is a four step process in-itself many traders rely on automated programs to calculate the CCI for them. Donald Lambert set the constant at 0.15, to ensure that between 70-80% of CCI values would fall in-between -100 and +100.  The percentage of CCI values falling between -100 and +100, is also partly dependent on the period selected. Longer look back periods will see a higher percentage of CCI values falling in the -100 to +100 range. It is important to take note of this fact when using the CCI, as it will play an important role in interpreting the indicator.

As the CCI is designed to measure the difference between a instruments price change and it’s average price change. Traders usually take high positive readings as indicating the prices are trading well above their average range, which is generally considered to be a show of strength. While low negative readings indicate that prices are trading well below their average range, this is generally considered a show of weakness. 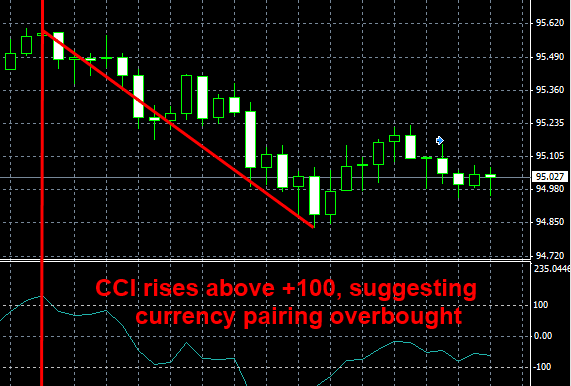 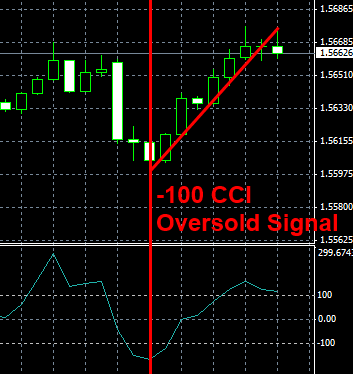 The definition of overbought/oversold varies when using the Commodity Channel Index. During periods where an instrument is trading in a particularly narrow trading range having +/- 100 as an overbought/oversold level might be quite effective. However during other trading environments more extreme levels might be needed, it is not unusual for traders to use +/- 150 or 200, as indicating overbought or oversold levels. The selection of the overbought and oversold indicators can also vary depending on the volatility of the underlying instrument. 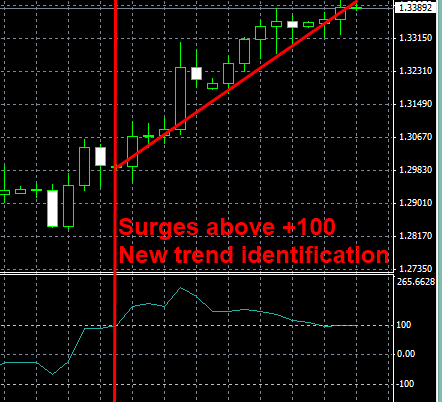 In the interpretation paragraph I briefly discussed how the Commodity Channel Index can be used to help identify new trends. The indicator was designed so that around 70-80% all prices would fall within the -100 and +100 range.  Using the 100 -/+ range as providing indication of a new trend can lead to a number of whipsaws (were the indicator doesn’t provide the kind of confirmation you are looking for).  This generally means traders don’t use the CCI on its own, with traders using other charting techniques or technical indicators to give confirmation to the signals produced by the Commodity Channel Index.

While the Commodity Channel Index is a particularly versatile indicator which can be used to identify overbought/oversold levels, as well being useful in identifying new emerging trends. There are a number of things that a trader should be aware of. The indicator produces overbought/oversold signals when prices reach a relative extreme, the particular extreme is dependent on both the underlying trading conditions as well as the volatility of the security in question. It is also possible to use the indicator to identify new emerging trends, to do this traders often use a preset level to identify such emerging trends, however it is important to use the indicator alongside other tools. It is often suggest that the On Balance Volume and Accumulation Distribution Line, can be used alongside the Commodity Channel Index.