The system was introduced in his 1978 book New Concepts in Technical Trading Systems. Wilder introduced a number of other indicators in his book including the RSI, Average True Range (ATR), and the Average Directional Range (ADX). Despite the age of Wilder’s Indicators they have remained incredibly popular.  The parabolic SAR remains a very useful indicator for traders engaging technical analysis and can help a trader determine where to place trailing stops. 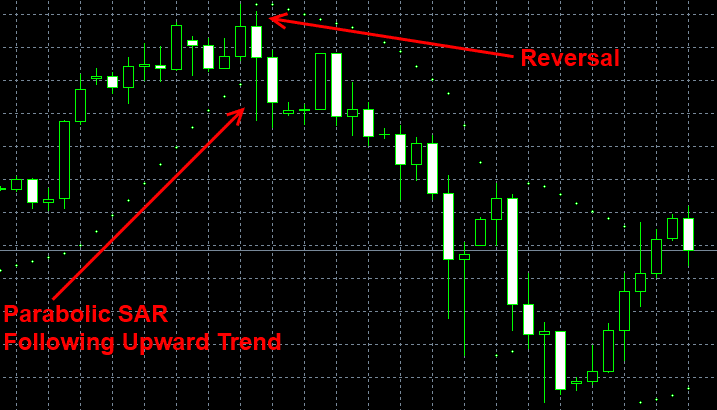 The Parabolic SAR, follows price action and should be considered a trend following indicator. Once a downtrend reverses and a new trend starts the Parabolic SAR follows the price upwards like a trailing stop. The SAR continues to rise as long as the upwards trend continues. The Parabolic SAR never decreases during an upwards trend and can help you continuously protect your profits. Thus the indicator can work to help you stop lowering your stop-losses, which is can be very tempting. When a upward trend ends and prices start falling the Parabolic SAR will remain above the price, again the indicator follows prices down like a trailing stop. Due to the fact that the Parabolic SAR never rises during a downtrend, thus it can help you protect your profits on short positions.

The sensitivity of the Parabolic SAR can be adjusted by altering the Acceleration Factor (AF). The AF is also referred to by some as the Step Increment. The Step or Acceleration Factor acts a multiplier which influences the rate of change of the indicator. The Step increases gradually as the trend extends until it hits it’s maximum value. The sensitivity of the Parabolic SAR can be decreased by decreasing the step. Lowering the Step will result in the SAR being further away from the price, which makes a reversal much more likely.

The Parabolic SAR works best when instruments are trading. According Welles Wilder’s original research this occurs around 30% of the time. This means that traders need to be careful when using the indicator, as it is prone to produce whipsaws when the instrument in question is not trending. The Parabolic SAR is designed primarily to follow an overriding trend and act as a trailing stop. As with the majority of technical indicators they quality of the signals produced depends on the underlying market and the settings used. Traders have to be particularly careful when using the Parabolic SAR as an indicator, as the wrong settings can lead to frustration and heavy losses.  As with many other indicators the Parabolic SAR is often used in conjunction with other technical indicators, with the Parabolic SAR often being used in conjunction with Wilder’s Average Directional Index.