One of the major selling points of Forex is the significant amount of leverage offered by many Forex brokers. It is not uncommon to find Forex brokerages offering leverage in excess of 500:1, such leverage is unheard of..  Leverage however is a double edged sword, while leverage will increase returns when times are good but will increase loses when the market moves against you. The excessive amounts of leveraged used by many traders is what makes Spot Forex a particularly risky financial instrument. Many new traders don’t have a proper understanding of how leverage works, this article aims to provide traders with a full introduction to leverage when it comes to Forex.

Leverage involves borrowing a portion of the total amount needed to invest in something. When it comes to Forex, a trader will typically be borrowing money from a brokerage in order to open a trading position. The high levels of leverage offered by many Forex brokerages allows for traders to take on huge positions with very minimal initial margin requirements. 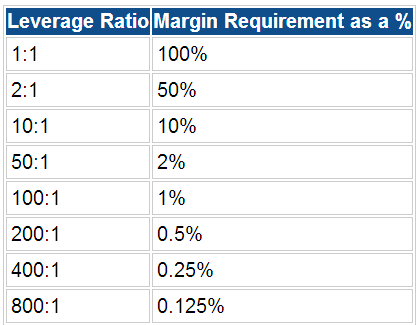 A brokerage requiring customers to have 1% of the total transaction value deposited in their account prior to opening a position would be offering leverage of 100:1. In this instance if a trader wanted to open a 0.5 lot position (equivalent to $50,000) in the USD/CHF he would be required to have at least $500 in the account. If a brokerage only required 0.5% of the total transaction value up front the trader would be getting leverage of 200:1, and would only need $250 in his account to open the same position in the USD/CHF.  The significant sums of leverage on offer have made Forex trading one of the most accessible forms of financial trading.

The use of real leverage has the potential to increase your profits significantly, but at the same time can increase the size of your losses. The greater amount of real leverage a trader uses the greater the risk they take on. It is often said that the main reason why the majority retail traders ultimately lose money is that they tend to use excessive amounts of leverage. 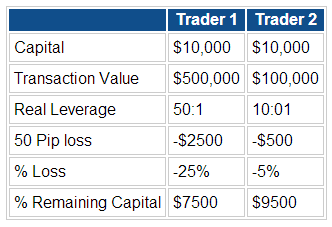 Imagine that there are two traders who both have $10,000 deposited in their trading accounts. Both of our traders use a brokerage that requires 1% initial margin. Additionally they both decide to long in the GBP/USD. Trader 1 takes a $500,000 5 lot position in the GBP/USD , while trader number 2 takes a much smaller 1 lot position worth $100,000. Unfortunately the market moves against our traders triggering their 50 pip stop loss.

From the above table you will notice the amount of leverage used by the traders has a huge effect on the kind loss the traders took. Trader 1 who used 50:1 real leverage lost a total of 25% of his account from one 50 pip loss, while the second trader who was more conservative took a 5% loss. Considering many traders are using real leverage far in excess of 50:1, a small move against a trader can wipe out an account. It would only take a 1% move against a trader to wipe out an entire account if a trader was using as little as 100:1 real leverage.

Preserving capital is vital when trading and limiting the amount of real leverage you take on is one way in which traders can protect their capital. The use of excessive leverage is extremely risky and many believe it is one of the main reasons why the majority of retail traders lose money. While limiting real leverage will mean that traders won’t make as much should the market move in their favour, many feel the trade off is worth it as reducing leverage will significantly reduce risk