MoneyGram is a world leader in remittances, and has been operating since the 1940’s, employing and working with 250,000 agents across the globe. On the other hand, it has been associated with exploiting poor work immigrants, and known to charge incredible fees. The MoneyGram share has been on a free fall since 2008, reflecting 98% loss, which makes us wonder about of the company’s health.

Fees: Anywhere Between 3%-8% Of The Amount Transferred. For Instance 36 Pounds on a 500 Pound Transfer To Euros | Anticipated Spreads: (Hidden Fees) Additional 2-5%

MoneyGram is the second largest money transfer company in the world. Through a decades-long history, it has developed into an advanced, convenient option for individuals and businesses around the globe, and transfers billions of dollars every year, much of which is in remittances. As one of the big names in the sector, it also has its detractors, along with negative associations it has amassed, being used consistently as a means of scams and fraud. MoneyGram has also faced controversy over perceived unethical activity, especially in Africa.

MoneyGram as it is today was started in 1998, but its roots can be traced back to 1940. In 1940, Travelers Express was founded in Minneapolis, quickly becoming one of the world’s biggest processors of money orders and a key player in the electronic payments industry.

At the end of June 2004, Vlad Corp sold MoneyGram, which became a publicly traded, individual entity. MoneyGram now has 350 000 agent locations in more than 200 countries, and makes $1.45 billion in annual revenues.

MoneyGram has the highest fees in the industry. In the US and UK, you may be charged as much as 10% of the amount transferred, and in other countries that figure may reach 20%!

In addition, it appears that MoneyGram charges hidden fees in the exchange rate, as their rates are much closer to the banks’ poor rates than those of other money transfer firms.

W Alexander Holmes has served as Chief Executive Officer for MoneyGram since January 2016. He previously served as Chief Financial Officer and Chief Operating Officer, before which he served as Executive Vice President. Holmes joined MoneyGram after nine years at First Data and Western Union, during which time he gained extensive experience in global financial services. While at First Data, Holmes held senior positions such as chief of staff, CEO, head of investor relations and senior vice president of global sourcing and strategic initiatives.

Larry Angelilli has served as Chief Financial Officer of MoneyGram since January 2016. He oversees all finance, accounting and treasury related functions including investor relations. Before joining MoneyGram in 2011 as Senior Vice President and Treasurer, Angelilli had more than three decades of financial services and treasury experience. This includes tenures with NationsBank Corporation, Chrysler Financial Corporation and The National Bank of Detroit; Director, Underwriting for Hudson Advisors/Lone Star Funds; and Senior Vice President, Finance at Centex Corporation.

As the 2nd largest money transfer firm, MoneyGram has a huge global reach. They have 350 000 agent locations in 200 countries. Their size and reach gives them the ability to remain hugely popular despite high fees and bad customer service.

In 2004, after splitting from parent company Vlad Corp, MoneyGram International Inc. registered on the NASDAQ (MGI) as a publicly traded stock.

During the financial crisis, MoneyGram’s shares fell 96%, losing the company $1.6 billion. The company was forced to sell a majority stake to Thomas H. Lee Partners and Goldman Sachs in exchange for a cash infusion. The company began to see profitability again in 2009. 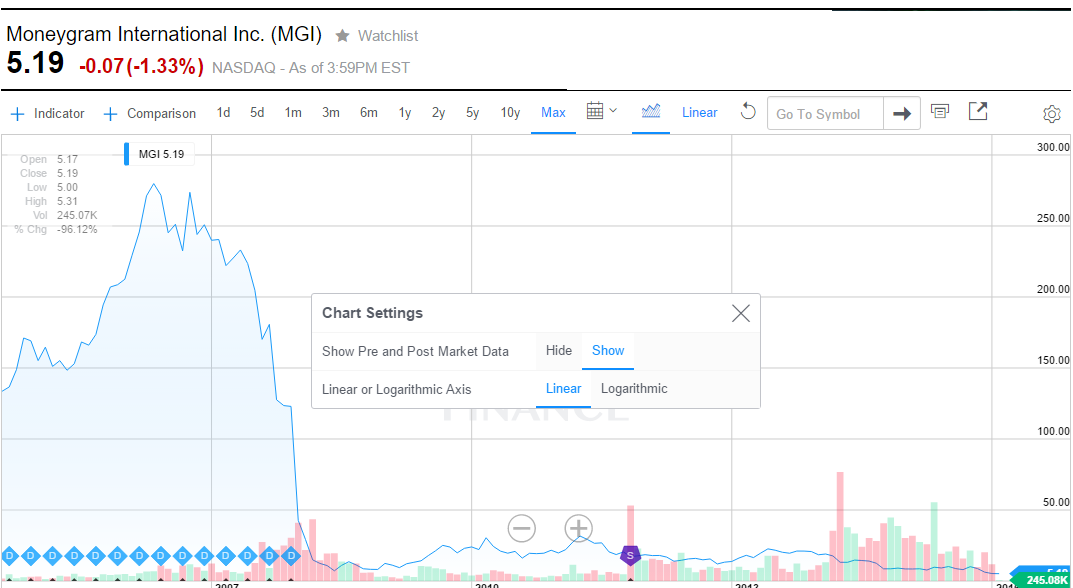 MoneyGram is authorised by the appropriate authorities around the globe.

MoneyGram has one of the worst reputations in the industry, despite maintaining its popularity and huge customer base. This is due to multiple reasons:

Fraud and scams: Like all big money transfer companies, Moneygram has been used consistently for fraud and scams. This in itself has tainted the company’s reputation. Then, in 2012, Moneygram International admitted to anti-money laundering and wire fraud violations. They created a $100 million victim compensation fund as part of a settlement, and agreed to retain a corporate monitor who reports regularly to the US Department of Justice for a 5 year trial period. Although they have since put a lot of work into dispelling their association with fraud, their reputation remains marred.

Exploitation: Although they have vigorously denied it, MoneyGram was accused of exploiting African migrants through disproportionately high remittance fees. Since they have a duopoly over the African market with Western Union, they have been able to charge huge fees, losing workers huge amounts. Big companies are often mistrusted when it comes to treatment of the disempowered, and accusations of wrongdoing may be misleading. However, this remains a blot on MoneyGram’s reputation.

Bad customer service and client treatment: MoneyGram is notorious for terrible customer service, and mistreatment of clients. Their staff are undertrained and rude, and getting assistance can take hours. On various reviews sites, customers have consistently rated MoneyGram around 2.7/10. This is in contrast to the 9+ average of many other money transfer companies.

Despite a poor reputation, MoneyGram is still widely used, due to its huge reach and publicity.

Leave Your MoneyGram User Reviews Below

One thought on “MoneyGram Review”